From our driveway camping spot in Orford, we headed up to Coles Bay to stay at the local caravan park. We had hoped to stay at the National Park in Freycinet however, we didn’t know what a popular spot this was and that in order to get a camping spot you need to put yourself into a ballot in July the year before! Needless to say we’d left our run a bit late.

After setting up at the caravan park, we decided to check out the area’s ‘Best fish and chips’. Almost 20 minutes later (back in the direction we’d just come towing the van) we finally found the illusive fish and chip shop – it was the Devils Corner winery that had a series of food stalls on site. $20 later, Master 17 and I decided to share a serve of fish and chips while Miss 9 had a wood fired pizza. While we waited for our food, I took the opportunity to finally try some of the great Tassie Oysters. Master 17 was planning on sharing my 1/2 dozen but after saying ‘hmmm not sure I like these’ after the first one, I very quickly took them all back for myself! The kids and I ran up the lookout tower (ok they ran, I took my sweet time) to check out the picturesque views.

On the way back to camp and the National Park (I wanted to take the kids to the National Park to take a look at some of the shorter walks – can no longer use the work hike – it strikes fear and dread into Miss 9 and she begins whinging about having to hike anywhere lol), we stopped at the Pondering Frog for some ice cream. Master 17 got stuck into the biggest home-made chocolate coated ice cream biscuit I’ve ever seen, while Miss 9 enjoyed a home made Berry Friday (it’s not a Sundae if you sell it on a Friday apparently) and I enjoyed a choc top raspberry ice cream cone. The home made ice creams were delicious!

We finally got back on the road to head back towards the National Park to enjoy a couple of quick views.

We walked up to the light house and enjoyed some of the views along the way, including the ‘Nuggets’, a couple of small islands offshore where thousands of birds nest each year away from predators. The kids discovered a little echo on the walk back so began yelling ‘coo-wee’ from the bushes to each other. Shortly after, we heard a reply call from the other side of the lighthouse of ‘we bought a Jeep’ – our fellow bushcallers could be heard laughing when we yelled back ‘what colour is it?!’.

Next we clambered down more rocks and discovered some unique looking cave rocks and a random boat tied to a tree up on the rocks. After some exploring and even more mosquito bites, we decided to head back to the car and get back to camp for dinner.

The next day I had hoped that the kids would be up for a climb to Mt Amos. Fortunately for me, Miss 9 still had no interest in completing any big hikes after the Overland so we headed for the Wineglass Bay lookout instead. It always amazes me how so many people take off on a walk to a particular destination (lookout, beach, mountain peak etc.) and just put their heads down and walk as fast as they can to reach the final destination first. We prefer to meander along and take in some of the sights along the way – like the cave that we spent a few moments guessing what once may have lived there, or the lizard that everyone else walked past so we pointed it out to a few other children on the path or even the very groovy wave shaped bench seat that was built by local students and placed just off the track.

At the top we took in the spectacular views of Wineglass Bay (which I later learned was named such for the blood that would fill the bay during the whaling season and not for the shape of the bay). We contemplated walking down to the bay for a dip and a closer look but decided against the return walk of 1,000 steps back up the very steep cliffs!

Back at camp and some new neighbours had moved in – turns out they were from Preston so Miss 9 quickly made friends with their Miss 6 and we headed to the beach for a quick swim before we headed off on our 3 hour sea kayaking tour. 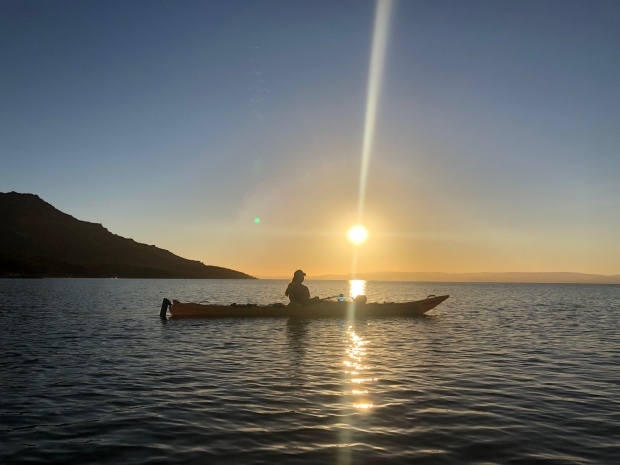 The kayaks were doubles so Miss 9 and I were paired up while Master 17 paired up with another young man also from Melbourne. We set off across the bay with Miss 9 doing some of the work and me quickly realising that I would likely have some very tired upper body muscles by the end of the 3 hours!

The waters were calm other than the odd remnants of passing boats and their wake so we enjoyed the paddling over to the other side of the bay to a smaller inlet where we stopped to hear a little about the area before heading along the route of the bay to another inlet further down. Here we learnt additional information about the whaling history of the area and then followed the curve of the bay to another spot where we stopped for some tea and biscuits. It was at this stop that the mother of Master 17’s kayak buddy fell out of her kayak and got drenched in the shallow waters (she blamed her son on the other side of the kayak but I think it was just that she was impatient and didn’t listen to the instructions on how to get out of the kayak without falling out).

Another stop a little further along where some Italian brothers had found some red granite and after not finding they work they had come to Australia for on the Sydney Harbour Bridge, set to work hand drilling the granite into blocks for sale. We could still see remnants of the hand drills stuck in a couple of pieces of the granite. Apparently the ‘People’s Purse’ in the Bourke Street Mall was carved out of the red granite from this very site – I’ll be sure to pay more attention to the sculpture next time I see it!

The final stop was at the RACT Country Club where we heard the history of the man who first dreamt of this place and had to rebuild it three times after fire ravaged the site before going bankrupt and selling. At the club there was a small jetty and we were challenged to ‘limbo’ under it in the kayaks. I thought it looked a little low to try but Miss 9 was super excited by the challenge. The mum of Master 17’s crew wasn’t keen on her son giving it a try so I reassured her that Master 17 was very mature and responsible – to convince her of this I yelled out to him to please take care – he was goofing around with his new mate so his response unfortunately didn’t reassure her. As it turns out, even though it was a VERY close brush with the bottom of the jetty, we made it through.

The final leg of the kayaking was one long straight paddle all the way back diagonal across the bay. By this stage, my neck injury was getting the better of me as my shoulders got tired and it started referring pain. Despite Miss 9 doing her best to help, I was doing most of the work on my own so our paddle back was the slowest but we had our guide, Sam paddling alongside as the sun was very slowly setting on the calm waters. We got back to the shore in time to watch the sun make its final descent into the horizon as I popped some ibuprofen and we headed back to camp for a light (and late) dinner before bed.

I must admit, despite the hard work of it all, a sunset kayak on the bay was the perfect end to our time in Freycinet and Coles Bay.