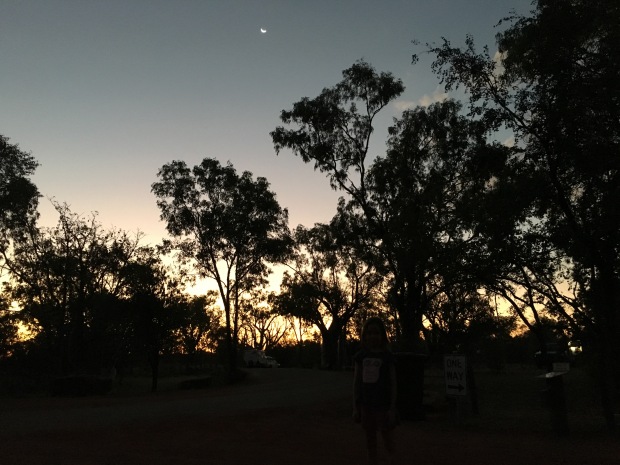 The plan was to head to Lake Argyle for a sunset cruise so we decided to break up the drive there and make an overnight stop at Timber Creek on the way. Enroute to Big Horse Creek campground I came across my first feral cat as it ran across the road – it was huge! We set up in the last spot at the campground and turned on the battery fan – it was around 37 degrees and not a breath of wind to be felt. The fan soon ran out of battery power leaving us dripping with sweat and limited cold water to share. Of course I made the ultimate sacrifice and let the kids have the cold water and settled for some very cold beer instead!

We tried to cool down with a walk down to the boat ramp at the Victoria River – there wasn’t much shade but the river was spectacular – so huge and incredibly still. Back to the van for burgers and a night of restless sleep under our bed fans with the temperature not dropping below 28 degrees all night and a loud camper nearby that sounded like a car idling all night. 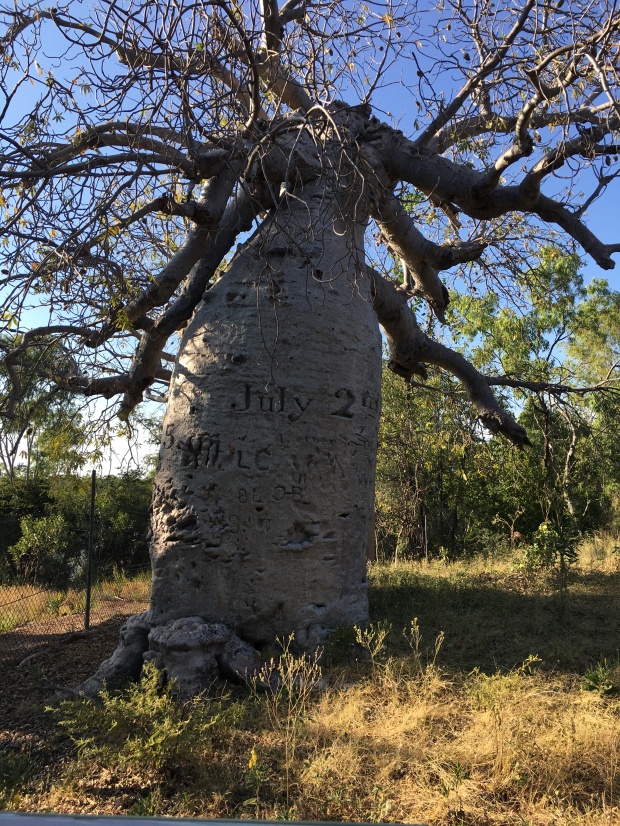 We missed out on the sunset boat cruise and booked the lunchtime one instead. Leaving Timber Creek around 8.30am we stopped at Gregory’s Tree on the way out of town, a large boab tree, significant for the local Ngarinman Aboriginal people and Augustus Gregory’s 1885 North Australian expedition.

We hit the NT/WA border and gained ourselves an extra hour and a half despite having to wait in a fairly long queue at the quarantine check. Some very efficient men with clip boards and blue shirts who took their job very seriously had a thorough look through the van before we were able to wind it back up and get on our way.

Arriving at Lake Argyle 15 minutes before our tour began I managed to outwalk the grey nomads ahead of me to reception and secure us a powered site before parking the car and van and heading on the bus for the tour. Our tour guide and bus driver was Jack and he and the rest of the crew were great – funny, informative and genuinely lovely. Lake Argyle itself is so incredibly vast with some great history and impressive stats to match – we weren’t sure what was more impressive, the stats themselves or Jack’s ability to roll them off his tongue as he did.

As we made our way to a lunchtime stop we cruised past a freshwater croc (one of around 30,000 in the lake), a pelican floating on the water and a lonely Jabiru. Apparently the males build the nests in the same place every year and the male and female meet there to breed but his female lifelong partner hasn’t been seen since the floods of 2011 so he keeps building their nest each year and sits there waiting for her to return. It was a little heartbreaking to hear.

We also got to see a whole family of rare black footed rock wallaby’s on an island on the lake and Miss6 got to throw some pellets out to them to eat – that’s twice now we’ve been lucky enough to see them on this trip. At our lunch break the crew got busy cooking up our silver cobbler (aka catfish) for lunch while we jumped into the 27 degree waters of Lake Argyle with noodles and I even got an icy cold beer.

Master14 was encouraged by Jack to jump from the roof of the boat which he happily obliged before we enjoyed a very tasty fish and salad for lunch.

After the tour we were allocated a campsite (our car and van were parked out the front for the tour) which was at the end of a long ‘road’ and the only way to get there was to reverse all the way down it to our campsite – lucky I’m a truck driver’s daughter and know how to reverse my camper well enough to get the job done. The site meant that we didn’t have to unhitch and could head off easily the next day.

After setting up we went for a swim in the infinity pool – nestled in among the rocky ranges the view from the pool was spectacular. The water however, was freezing and I wanted to hop back into the water in the lake but stayed in the pool to watch the helicopter take off for a scenic flight and come back again then I was out. 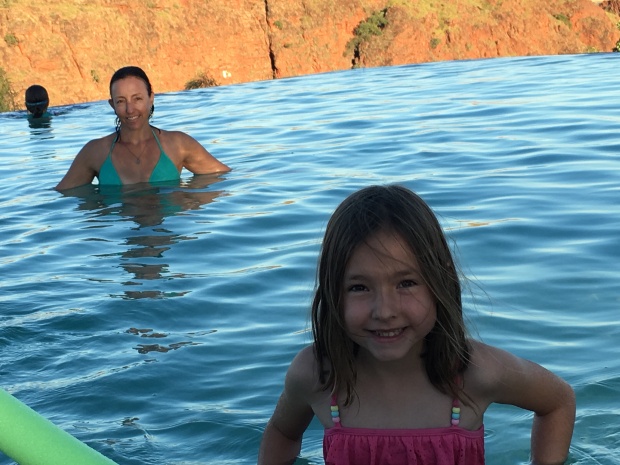 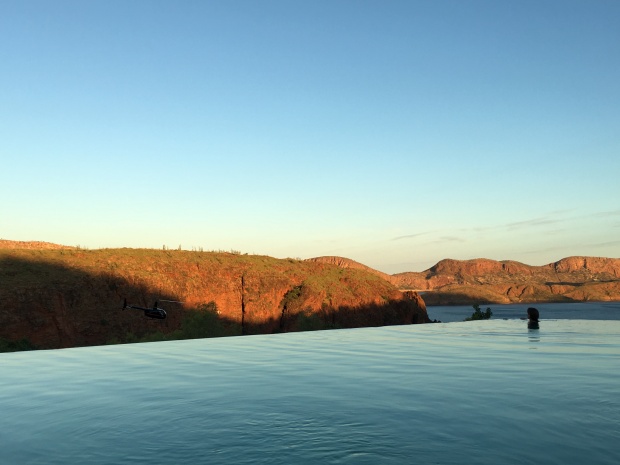 We’d eaten so much for lunch that we had a light dinner and went to the beer garden to hear some live music for a few hours before bed. Our camp neighbours were a lovely older couple from Perth who were about to set off along the Gibb also and encouraged us to stay an extra night and take a look at Kununnura and the old Durack Homestead down the road. I slept on the idea and booked us an extra night in the morning. The WA time difference is playing havoc with my body clock though so I was awake at 5am and had to wait until 7.30am to book the extra night.

We unhitched the van and headed to the Durack Homestead to take a look. The Durack family once owned the farmland surrounding the Ord River (that was dammed to make Lake Argyle) and had built the homestead off one of its subsidiories called the Behn River. The kids were pretty happy with that fact as the river shares their dads name. The homestead was relocated as its original site is now under water in Lake Argyle. They’d anticipated it would take nine years for the lake to fill but it only took three and we heard the story of one of the station keepers who went to bed one night with the river looking full only to wake up the next morning with his bedroom a foot under water – he had to crawl onto his roof with a few possessions and get rescued. Needless to say, there’s a lot more sitting at the bottom of Lake Argyle than originally planned!

Our day trip into Kununnurra began with brunch at the Ivanhoe Cafe where they also farmed Chia seeds so we bought a pack to add to our camp kitchen pantry before we headed to the Indian Sandalwood farm. The products there were amazing and I could’ve bought so much more but we settled for the nicest smelling hand sanitiser I’ve come across and some bath salts for when we get home and need a good soak.

Next it was off to the Hoochery Distillery for some taste testing and a look around. I figured if the drinks were no good at least I liked the name of the place! I tried their whiskey and liquers (couldn’t do the rum) which were delicious and treated the kids to softdrink to keep them happy.

We sat down with another family and got chatting to them only to find they’d just come off the Gibb River road and El Questro which was our next stop. Nobody had warned them that there were three water crossings on the way in to El Questro so when they reached the biggest one at the front gate they’d stopped and waited an hour for someone else to go through first. Luckily for me, they’d filmed their drive through it so I got to watch it and was well prepared for what was in store for us tomorrow.

After our drinks we headed to the Zebra Rock Gallery for a look around and as they were closing the manager gave us some bread to take down to the jetty to feed the fish. There were so many catfish (aka silver cobbler), archer fish and turtles – the kids loved it – especially when one of the archer fish spat at me and managed to get my necklace with a precision shot! Next up was the supermarket to stock up for our time along the Gibb so we didn’t get back to camp until dark for dinner and some prepping and packing away before we set off in the morning.