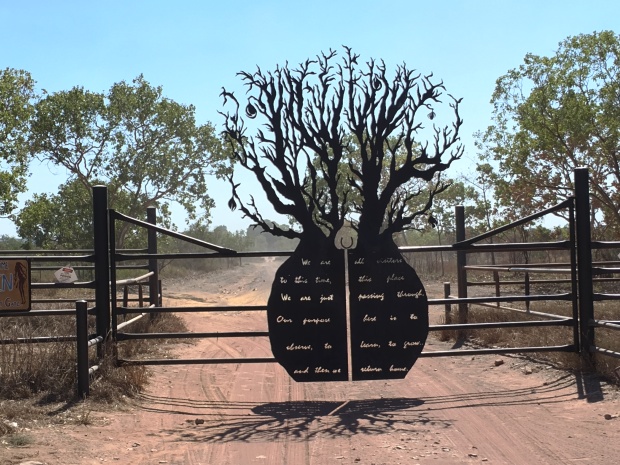 After bidding our FCUK friend a final farewell from El Questro, filling up with fuel and buying Miss6 her early birthday present of a genuine Kangaroo leather jackaroo hat, it was time to hit the Gibb and all its corrugations for the next 600 odd kms. We weren’t driving far and didn’t think the road was too bad, sitting most of the time on 60 and often getting to 80. We got to the famous Pentecost River crossing and luckily had already been told that it was very similar to the entrance to El Questro, just a lot wider. I decided that since we were on a real main road that Miss6 shouldn’t stick her head out of the sunroof (much to her disappointment), though in hindsight I don’t think there was much danger in doing so and unlikely that an officer of the law would’ve seen us. 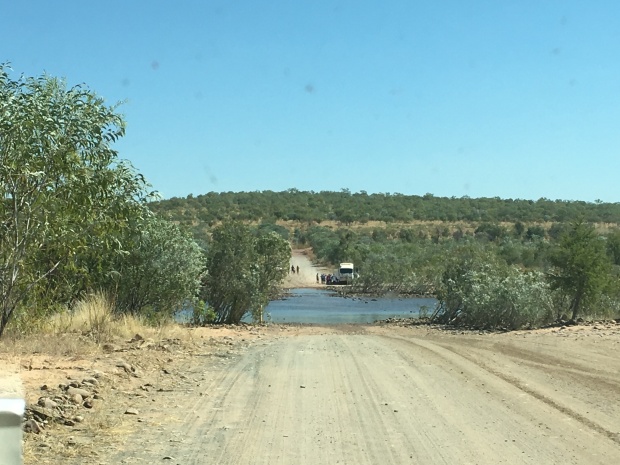 After the long and bumpy crossing we managed to get to Home Valley before lunch and set up under the shade of a tree, had some lunch and headed to the pool. Our brief wifi access as we’d driven through Kununnurra had downloaded some of my emails and I noticed one from work offering me the opportunity to apply for my own job for a further nine months once I got back to Melbourne – applications closed at 5pm today – it was 3.45pm WA time and I had no phone and no internet service. I paid $5 to make a two minute phone call to work to let them know I’d try to email something through and another $5 for 100MB of data which I hoped was enough to get an email through – it had run out before I could check my sent messages so I just left that one up to the universe and figured when it came down to it – my new attitude was that they need me more than I need them.
The following morning we’d booked a four hour shore fishing tour – we’d been told that we would be walking along the shore possibly in ankle deep mud and sand so we had our thongs on and some super strength Bushmans cream. We met Callum and were joined by a father and son team before we hit the 4WD track down to the river. The Bushman’s came in handy as everyone else was getting eaten alive by the mozzies as we walked along the shore line throwing in the net for some live bait. We were fishing for barramundi and it wasn’t until Callum pointed out that Miss6 and I were walking over a croc slide that I remembered that saltwater crocs also liked to eat barra and didn’t mind the taste of humans either! 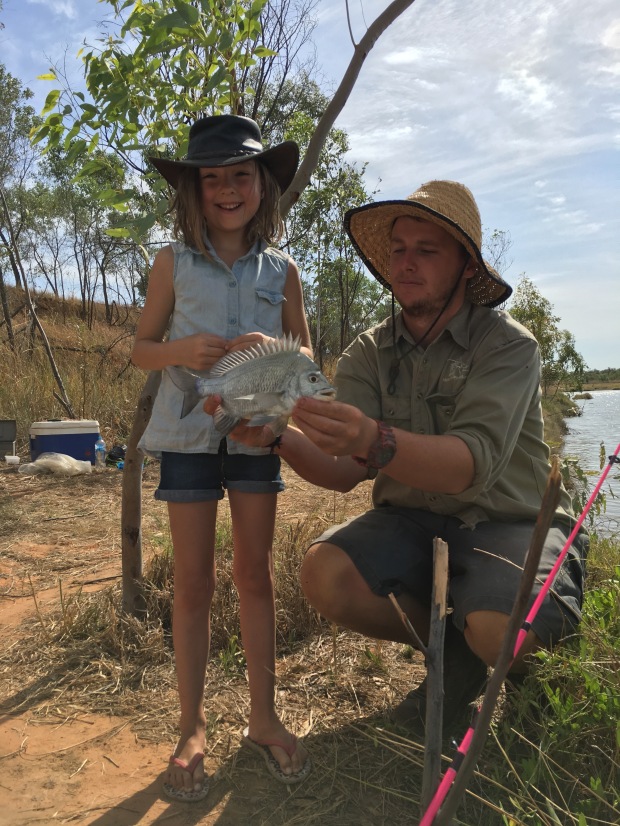 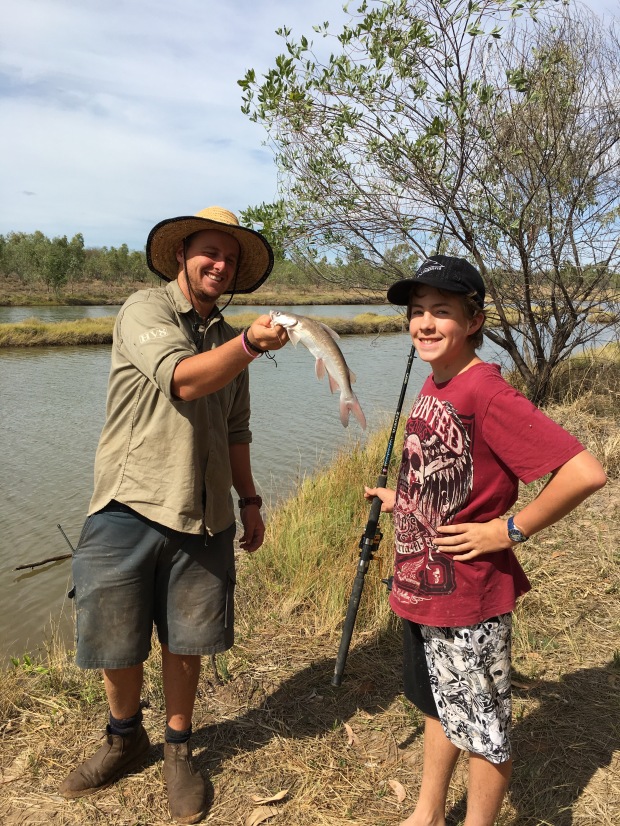 Miss6 was very upset when I made her stand back from the shore and let the others volunteer to hold the bait bucket for Callum. The tour supplied us with some pretty good rods but I’d brought the kids cheap Kmart rods with us so that Callum could set them up for us and show us what to do and how to cast off – Miss6 has a hot pink rod that lights up when you reel it in – very practical for barra fishing. Nobody was laughing though when she reeled in a Mud Crab and Spiny Bream on her $7 rod and Master14 reeled in a Catfish on his $14 rod – the other rods simply spent the morning decorating the shoreline!

Miss6 loved casting a line so much that Callum gave her one of the massive rods to use and she managed this for ages without getting tired. It wasn’t until we were packing up for the morning that I learned of the difference between ‘fishing’ and ‘catching’. Back into the 4WD and back to camp. There were a few moments on that drive back I had to hold my tongue for the temptation to remind Callum that he had a mother of two kids in the back – the bumps he was taking at high speed nearly caused a few Tena Lady moments!

After lunch we relaxed by the pool again for a few hours before hiking up to the Cockburn Ranges lookout for sunset and some random phone service. The kids talked to Nanna and their Dad and let them know that we’re on the Gibb and would be without phone service until we got to the end of it in a week or so.

We decided since we’d caught nothing for dinner this morning that we would eat at the Dusty Bar after watchng the whip cracking man for a bit. The venue is pretty impressive – something people would pay a fortune and wait years to book as their wedding venue I thought. The meals were yummy too – we decided after our close call with cros today that we’d give one a try for entree – it was the only native we hadn’t tried yet so we ordered some croc skewers. We all thought they were delicious and Miss6 asked the waitress if we were eating a salty or a freshie – she had to ask the chef and apparently you can’t eat freshies as they’re too tough – she was pretty happy to have eaten a salty.

After dinner we sat with our fishing friends and luckily for Miss6 they had a young daughter for her to play with while we all listened to some live music. On the way back to camp we got to see fisherman dad catch and kill two cane toads near the toilet block – I’d tried to catch one under an empty bin the night before but they move too quick for me so I was impressed at this evening’s catch.