While we avoided the rain while we packed up, we didn’t avoid the wet – the awning and bed ends were soaked. We headed to Busselton and got there in time for some hot soup for lunch and booked us onto a train ride down the pier. Unfortunately the underwater experience wasn’t open due to some storms the night before. We had thought we’d ride the train down the pier then walk it back but the weather was a bit cold and we’d brought our lunch from the car so I didn’t really want to walk back the 1.8km carrying everything in the cold.

The train took us to the end of the pier and it was truly amazing just how long the pier is. We had the opportunity to spend some time at the end of the pier where an artist had painted pictures of whales to scale – the kids and I were pretty amazed at just how big some of them were. The Humpback and Right whale were fairly large but the Blue Whale was absolutely ginormous according to Miss6.

The neighbouring visitor centre had told the kids about some of the caves in the area – one nearby that had a ‘tunnel of doom’ for the kids so they were pretty keen to head there before we made our way to Margaret River. I called ahead to Wharncliff Mill and booked a site for two nights and headed to Ngilgi Cave for their last tour of the day. The cave is 500,000 years old and pretty spectacular – even I had a turn at the ‘tunnel of doom’ and we all liked the amphitheatre too – laying on our backs and looking up at the stalactites hanging from above was like looking at a surreal city.

We got to our campsite and set up with hopes of lighting a fire but it started raining so we stayed indoors. The rain had cleared by morning so we headed down to Cape Leeuwin to check out Jewel Cave – the largest show cave in WA. The entrance was large and well made and we later learned it was entirely man-made as the only natural entrance to the cave was a 12m deep hole resembling something that Bugs Bunny would crawl through and led directly to an 8m drop to the ground.

The cave was stunning – it had some similar stalactite and stalagmite features as Ngilgi but less of a narrow adventure and more huge open areas. The cave used to have water in it and the boardwalks would sit higher but the water has all dried up. They’ve found fossils of a Tasmania Tiger in the cave, it had falled down the hole and couldn’t get back out in the dark.

We climbed back out the 500th step and headed to the car for the drive to the Cape Leeuwin Lighthouse, the tallest on the Australian mainland, sitting in the most South Westerly point of Australia where the Indian and Southern Oceans meet. We joined our tour guide and walked the 172 steps up to the sixth floor and out onto the balcony – it was a blustery view of the ocean below and would’ve been quite a tough gig as the lighthouse keeper back in the day.

We learnt that there were 22 ship wrecks before the lighthouse was built and only one after it was built. The ship that wrecked was built by the same company that built the Titanic, only this one had enough life rafts to save those on board – I don’t think it says much for the captain’s they hired though as this one ignored the lighthouse warning and tried to cut the corner. Luckily the lighthouse keeper saw the ship’s distress signal and lit fires along the shore to guide the life boats safely to land. 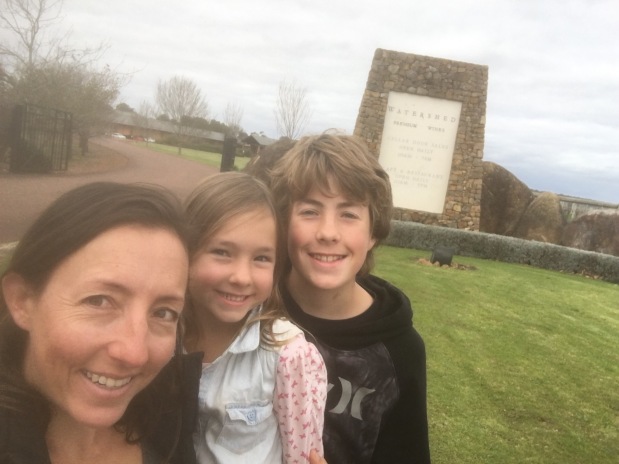 I managed to convince the kids to hit a couple of wineries for the afternoon with the bribery of some lunch. I’d always thought of wineries when I thought of Margaret River but now I was starting to think of caves as well – I figured lunch at a winery would even things out. We had a yummy lunch at Watershed Winery with a lovely view of the vineyard below before we headed to Voyager to check out their gardens (and taste a few wines while we were there).

The gardens there are immaculate and would be gorgeous to look at in Spring with the roses in full bloom. There were two other wineries I wanted to visit but decided against rushing to see them at the end of the day so instead, we decided we’d stay a third night as we’d saved a night by not staying in Busselton. With our spare time we grabbed some fuel and groceries before getting back to the campground where we all had a play on the adventure playground right next to our campsite. We lit the fire and sat around it eating dinner and toasting marshmallows for the night.

We woke the next morning to some pretty nice weather so we decided not only to visit Sunflowers Farm but to head to another cave – the more the kids hear about, the more they want to visit. After paying for another night and a milk crate of firewood we were off to Sunflowers Farm – the big attraction that Miss6 was especially looking forward to.

Sunflowers Farm was full of animals that you could walk around feeding, patting and even getting into some of the pens with them. We fed and patted our way through lambs, goats, joey kangaroos, clydesdale horses and a shetland pony, chooks of all sorts of breeds, guinea pigs, rabbits, pigs, llama, an emu and an ostrich (note: just drop the food over the fence for the ostrich – I tried to hand feed it and it took the idea quite literally and nearly took my whole hand with the food). 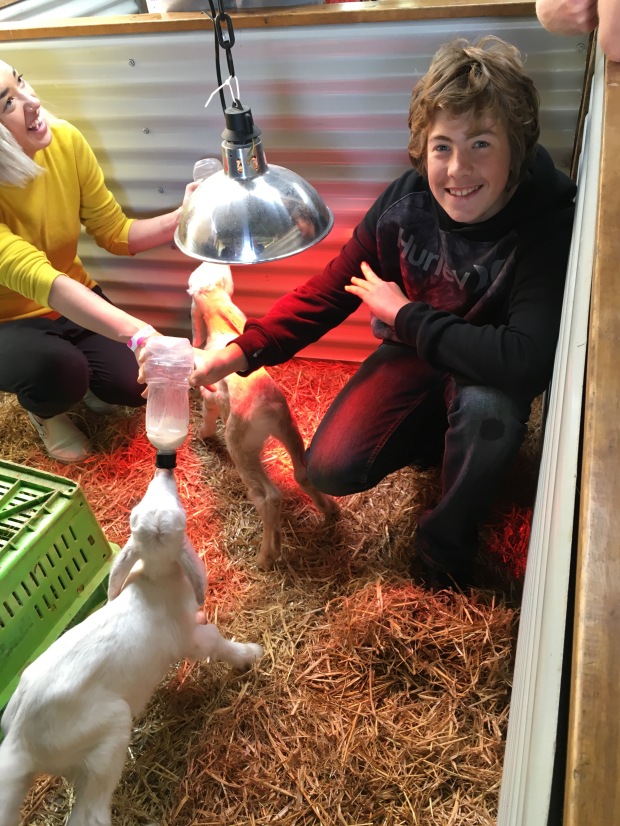 After visiting all the animals and going through two buckets of feed we headed back to the main office where there were a couple of goats roaming freely, a corella that liked to talk, some three day old chickens and some very young kids and lambs that you could sit with in their pen. Well, Miss6 very quickly made herself comfortable in this pen and I started to wonder how I could get her out of there – she was happy with the idea that we go off for the day and pick her up later.

Luckily, it was feed time and she got to hold a bottle of milk and feed one of the kids and even Master14 got in on the action (they were very cute and hard to resist). We finished off the visit with an ice cream – we’d heard great things about ‘Simmo’s Icecream’ and thought we should try one. We went for two scoops and they were piled up that high on the cone that both the kids needed a cup to put the top scoop on (which it easily filled) as the weight of it meant it had started sliding straight off.

We burnt the mega ice creams off on a pirate playground before hitting cave #3. This time it was Mammoth Cave, a large open cave that you enter from one end and walk right through to the other end. We were given some self-guide audio devices and headphones so that we could hear about the cave as we walked through it. This cave was home to over 10,000 fossils when it was originally developed for tourists – the work of putting in boardwalks through the cave uncovered the fossils and confirmed the existence of mega fauna in the area which was very interesting to Master14 and I.

Miss6 however, was especially keen to walk all the way through the cave and then come up and walk back over the road we’d driven on to get there. On the way out of the carpark we saw a car crashed into a ditch at the entrance, we stopped to check everyone was ok before heading off to another winery for me (this time I bribed the kids with promises of a cheese platter). 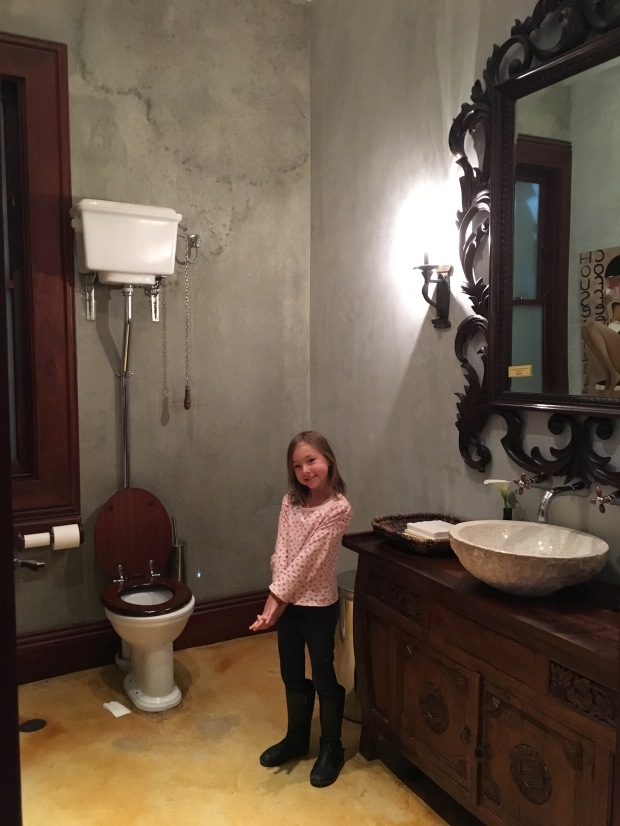 We started at Lawrence Winery as I’d been told to check out their lavish loos. While we were there I also made sure to taste some of their wines and pick up a bottle on sale before we checked out the gardens and lady on the lake statue (not its real name but a fond nickname). The kitchen had just closed so we couldn’t do a cheese platter here but they told us that the food at Black Brewing Co. across the road was amazing and still open so we headed there for a cheese platter and some fat fries.

I got Master14 to try the blue cheese on the platter and he could handle a few bites before sticking to the cheddar and soft cheeses. I had to trick Miss6 into trying the blue cheese but it didn’t work so I ended up eating nearly all of it myself (there are worse things in life).

I’d forgotten that we knew someone that lived in Margaret River and ran a local winery so after checking in with family in Melbourne for the details we ditched the planned visit to Vasse Felix (next time list) and headed to Sandalford wine to say hello. Unfortunately she wasn’t working that day but I bought a bottle of their Shiraz (though their Rose’ is to die for) and headed to the chocolate factory (I’d nearly forgotten about this place – sacrilege to us chocoholics).

Luckily for my credit card and waist line that it was almost closing time though we did find the time to taste test everything on offer, buy a chocolate map of Australia (I’ve told the kids we’ll eat one holiday location at a time when we get home) and some other tasty treats before heading back to camp.

On the way back home we drove through Cowaramup and they had they’re own version of the lady on the lake – a striking resemblance we thought. 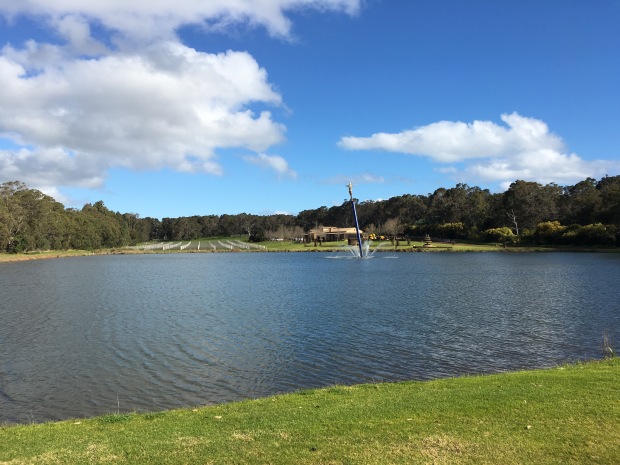 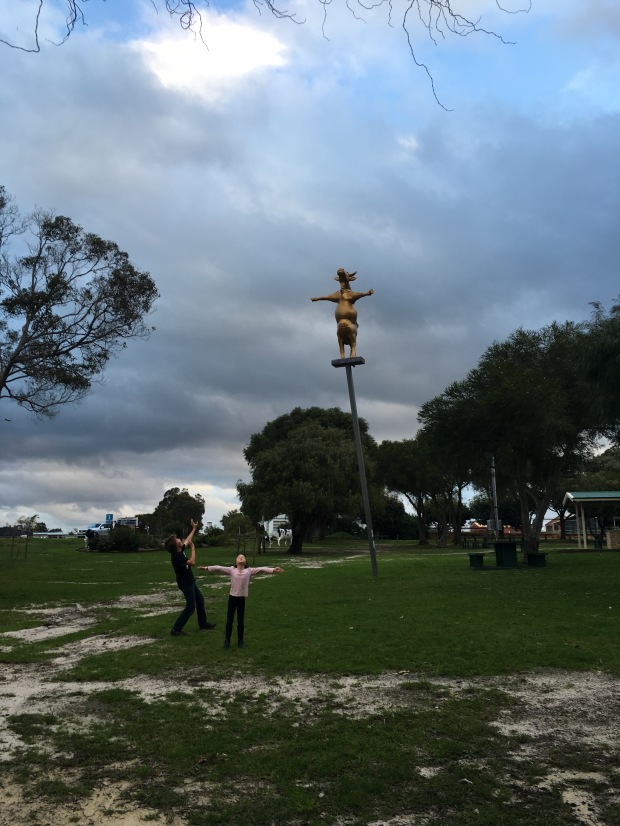 It was a gorgeous sunny day and a lovely mild afternoon – perfect for lighting the fire and sitting around it to eat our dinner again though we didn’t toast marshmallows this time. Our last night in Margaret River and though I wasn’t expecting too much from this place, we were all pleasantly surprised and really loved it – could definitely come back here again!