Despite some noisy ‘C’mon kids we need to have an early night cos I’ve got lots of driving to do tomorrow’ camp neighbours kicking on late into the night, we all got a good night sleep and woke to the melodic tunes of neighbouring roosters harmonising with the local kookaburras (at 5am!).

It was a sunny 22 degrees in Burnie so we walked from the caravan park across the road to the beach for some lunch and afternoon in the sun (after a morning hitting the shops for some essential – and not so essential – items, including an inflatable mermaid tail).

The water seemed freezing to me but Miss 9 and Master 17 were happy splashing around while I got on with the job of blowing up the mermaid tail. I quickly grew disinterested in using my yoga breath for inflation purposes so Master 17 volunteered to walk back to the van to blow it up with the air compressor while Miss 9 and I played in the sand.

We soon heard Master 17 returning (from the distinct tooting of passing cars) before seeing him emerge from the Bass Hwy draped in a giant teal coloured inflatable mermaid tail. The kids were quickly in the water leaving me with the novel I’d planned on finishing on the sail over from Melbourne. The kids eventually retreated to the sand where they got stuck into their favourite beach pastime of burying Master 17 in the sand and digging holes, building moats and sand castles and eventually burying Miss 9 all the way up to her neck (my little girl is growing up?!). After hours at the beach, we all had a little bit too much sun (I could never imagine going to a beach in Melbourne if the weather was only 22 degrees – being closer to the hole in the ozone sure makes for some different heat).

We headed to the foreshore for some food and New Year’s Eve festivities. Miss 9 carefully chose her face painter based solely on their ability to paint an animal face and left happy with her new tiger looks. The two thrill seekers then boarded the Lethal Weapon ride on full stomachs before we headed to the beach.

On the beach was a giant bonfire with some mega logs giving off great flames and heat – enough to be the envy of any campfire loving traveller! 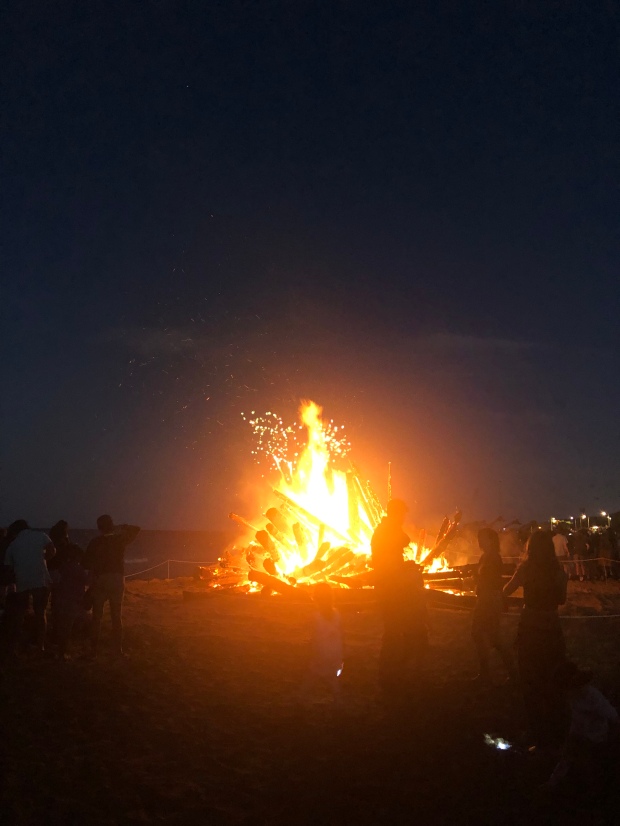 Young circus performers played with fire as they juggled, swung hoola hoops and jumped skipping ropes to the beat of a live drum performance. Soon after a spectacular fireworks display went off while we stood on the beach watching.

Despite the great weather, music, bonfire, some wild glowing hair and front row seats among a growing crowd, team kickarse were anything but, and retreated back to camp around 11pm to see in the rest of the New Year from the camper.

Heads eventually drifted off at midnight to the sounds of the pops and bursts from the final fireworks display. And so 2019 and the next chapter in our adventures begin…