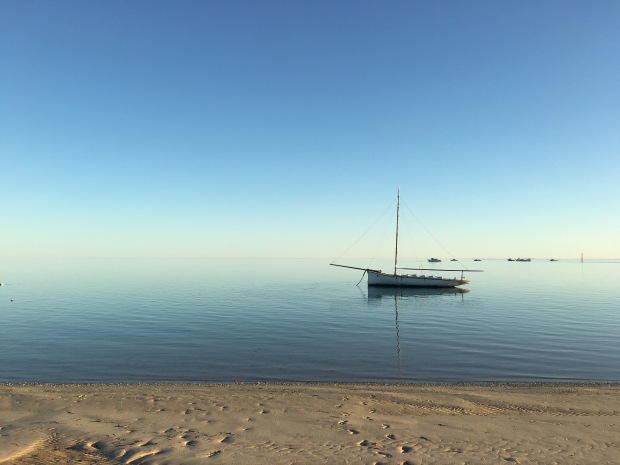 Our KC family friends had messaged to let us know that they were on their way out of Denham and that they might see us at the Overland Roadhouse as we headed in to Denham. I didn’t like our chances as we didn’t get to the roadhouse until well after 1pm and I figured they’d be long gone by now and on their way south. I pulled in for fuel and sent a message to let them know that we’d only just got to the roadhouse. As I pulled out of the driveway though, they were heading in so I turned around and stopped at the roadhouse to have a chat. I was telling them all about our hike up to Mt. Augustus while they told us about their adventures in Denham and Monkey Mia. It turns out that the other six year old little boy that we’d seen on the summit register was someone that they knew – such a small world sometimes when you’re travelling around.

We got into Denham in the late afternoon and set up the camper in an overflow area of the caravan park – it’s packed in town and even Monkey Mia were booked out for the two days we were staying. We got to the Visitor Centre just as it was closing but in enough time to get the quick rundown on a few choice things to do. We grabbed the fishing rods and took them out to the end of the pier to try our luck but we didn’t have a squid jig so it was really just for the fun of it all. I took the kids rods back to the car once Miss6 had managed to get her line tangled and we stayed on the pier to watch the sunset. We ate leftovers for dinner and headed to bed early as we wanted to be at Monkey Mia for the first Dolphin experience at 7.45.

It was only a 20 minute drive to Monkey Mia and we were there in plenty of time for the first feed and Dolphin Experience. We had the option of standing in the water as the rangers talked to us about the Dolphins and the Dolphins themselves swam up and down the shoreline. The water was absolutely freezing and as my toes, feet, ankles and slowly my calf muscles began to go numb I was increasingly jealous of the rangers full waterproof pants and shoes. The Dolphins looked so beautiful as they floated in and out of shore and along the crowded beach, rolling to their side to take a look at us as we said hello to them.

We had to step back out of the water when it came time to feed the Dolphins and four of the volunteer feeders entered the water and got to pick four people from the crowd to feed each of the Dolphins. There were about 80 people waiting on the beach and we didn’t get picked to feed them that first time around. About half an hour or so later they did a second experience and again my feet and legs were numb from the cold water and had started to go a deep red colour from cold. I held Miss6 on my hip and as I got tired Master14 held her for a bit to keep her out of the cold water. 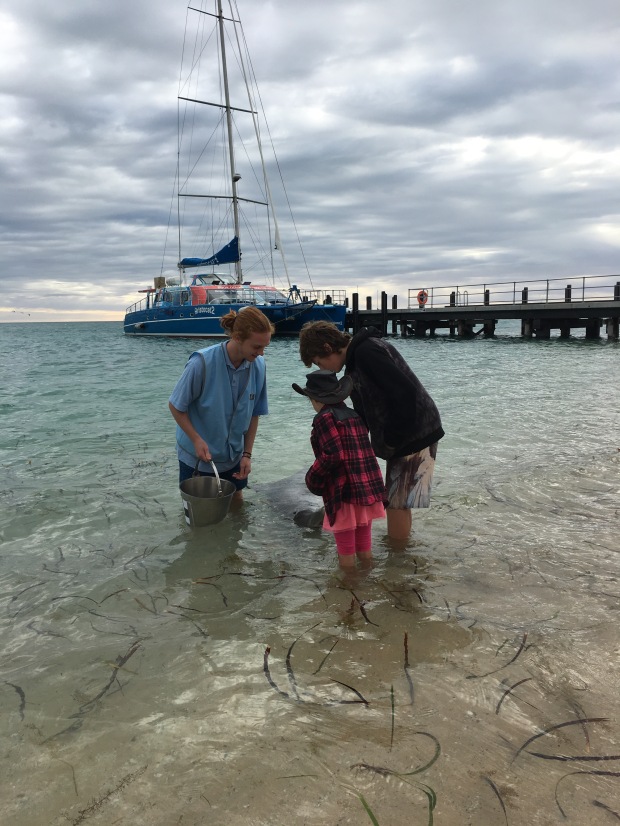 When it came time to feed the Dolphins this time around, there were only about 20 of us in the group – I think the cold weather was keeping people away. Master14 was called to feed the Dolphin and asked to bring his little sister with him – they both waded out into the icy water to feed Puk the oldest Dolphin there she was 39 years old and mother to one of the other Dolphins being fed that morning. The kids were pretty happy they got to feed her and afterwards we all celebrated (and thawed out) by having a hot chocolate and some warm scones with jam and cream. Miss6 was very excited by the fact there were a big group of Pelicans (actual ones not seagulls that she usually calls Pelicans) hanging around the beach stretching, sitting and generally appearing to pose for photos!

The third feeding didn’t start until well over an hour or so later and by then we’d finished our morning tea and had a look around the resort and were heading to the car and didn’t want to get our feet frozen again so missed that one. Some people however, were only just arriving as we left and would’ve been lucky to see it.

We headed to Francois Peron National Park and the Peron Homestead for a dip in the artesian hot tub where the water was at a constant and very toasty 40 degrees. After soaking in the tub for a bit we dried off and took a walk around the grounds, playing make-believe in the old shearing sheds.

Back in the car we stopped at Little Lagoon for some lunch and a look around then back to the caravan park to bring in our laundry off the line that I’d hung out the night before. Our KC family friends had recommended the Aquarium so we headed out there in the afternoon for a guided tour.

The tour was interesting and informative and Miss6 was especially impressed at a leopard print (her favourite pattern) stingray named Beyonce who smiled at her through the glass when she was being fed. When we got back to the caravan park I dropped the kids at the jumping pillow and who should be there but our Flinders Ranges family playing also – they had just arrived for a four night stay. The kids played for a while until dinner time and then we stayed inside listening to the rain as it fell on the roof hoping that it stopped by morning when we’re packing up.

We were lucky and managed to pack up without the rain in the morning and without everything being too wet. We decided to make a few stops along the way to Kalbarri with the first stop at Shell Beach. The beach is exactly as it is named, entirely made up of shells (much like the surface of the overflow camp area we’d just spent the past two nights). The kids tried to bury each other in shells as we walked along the ‘beach’. While the sun was shining, the water was far too cold for us to have a swim.

Next up we made a stop at the Stramatolites – I wasn’t too sure what they were all about and wasn’t too much the wiser after we left but I do know that they are made up of microorganisms and are the oldest living ecosystem on Earth. The wooden pier you walk out on to view them gives you a lovely view of the surrounding area also. We ate lunch while we were there then back in the car for the drive to Kalbarri making a stop again at the Overland Roadhouse. This time there was a queue for fuel so I took the opportunity to book us some accommodation in Geraldton and call ahead to book Master14 and I in for a skydive on Sunday morning – what a way to start a day!

One thought on “Dancing with Dolphins”