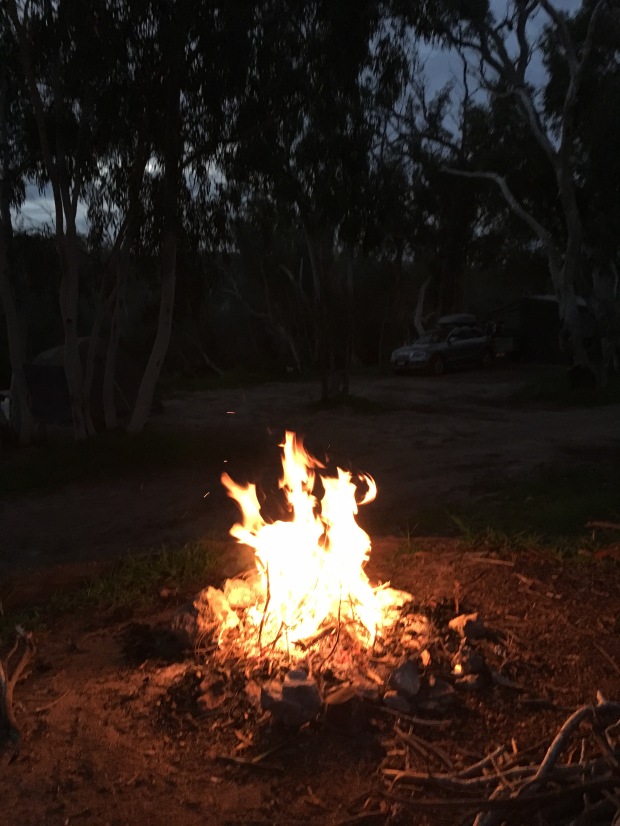 We were looking forward to getting to Murchison Station, bordering the Kalbarri National Park, it had some great reviews and our KC family friends had let us know that it was a great place to stay – in another case of small worlds, they ended up camped next to my old workmate and his family! After our sightseeing on the way out of Denham we didn’t get to Murchison Station until around 4pm so we unhitched the van and drove straight to the National Park to squeeze one hike in before sunset.

As we entered the National Park though it went from a light drizzle (which we were happy to put up with while walking), to a heavy downpour so we decided instead to turn around and head into Kalbarri to look around. We refuelled while we were there and checked out a couple of lookouts before we thought we’d cheat and have fish and chips for dinner. We were out of luck though as the shop was shut – they’d either gone fishing or had no power, the signs on the door couldn’t agree.

We headed back to the station so that we could set up before it got dark. Master14 started the fire while I made a start on dinner. The kids from the station popped past and asked the kids if they’d like to play so they ran off to have fun while I sat by the fire with a wine waiting for dinner to be ready. We went to bed early as we had to be in Geraldton the next morning by 10am for a service on the car. 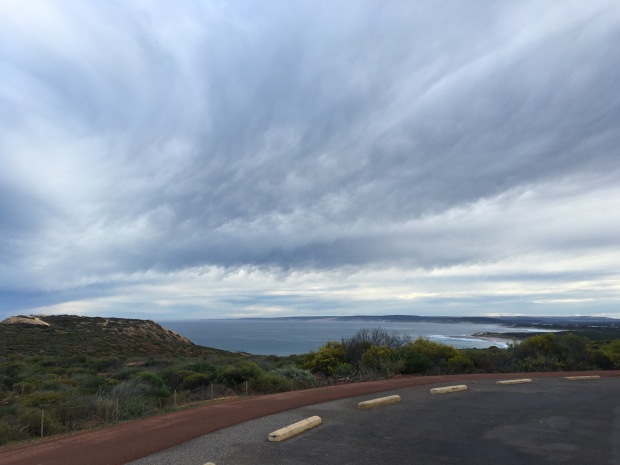 The alarm went off at 6am and so did the rooster, though when I went for a walk it was still pitch black and I needed the torch to find the bathrooms. I pottered around and eventually woke Master14 at 6.45 and just carried Miss6 straight from bed to the car with a warm blanket and brekki and we were off by 7.40. While we were proud to have made it out of the campsite so early, it was still a disappointing feeling to have to leave – the station is a lovely spot with campsites along the river and the National Park right on the doorstep – it would be a great place to stay for a few days. Another one to add to the ‘come back and visit list’ (which at this stage is starting to get pretty long).

We got to Geraldton and dropped the camper at the auto electricians (a fellow camper wanted to look under my van to see how they’d got it to sit so high off the ground and noticed a wire on my electric brakes was broken) and the car at Toyota for a routine service and to check an unusual smell that I’d noticed only a day or two before.

The kids and I walked down to the foreshore and spent most of the day playing on the amazing playgrounds down there. There was a big kids playground that had huge climbing equipment and a fun enclosed slide (even I had a go on that) and some interactive electronic games that got you moving and competing against each other. Master14 even played with his little sister on the younger playground, helping her go really fast on some of the equipment and showing her how to balance on the surfboard – it’s always so nice to see the two of them play well together considering their big age gap.

Toyota were due to finish with my car around 2pm so we decided to take a walk up the hill to check out the HMAS Sydney Memorial – this one was far more elaborate than the one in Quobba. It was made with 645 metal seagulls all welded together to form a dome at the top of a hill overlooking the ocean – it was very impressive and sombering along with the names of all 645 seamen that lost their lives.

While we were there, Jurien Bay Skydive called to say that tomorrow morning would be better for a skydive than Sunday and could we jump tomorrow instead?! We had originally planned to stay the night in Geraldton but decided that as it was only a few hours drive away, if I booked the caravan park over the phone, we could make it in time for sunset.

On the way back to pick up the car we stopped at the Sea Lion lookout and were lucky enough to see one of them lounging on a rock – we didn’t realise how rare they were and felt pretty lucky to have spotted one in the short time we spent at the lookout. We picked up the car and camper and hit the road with visions of jumping out of a perfectly good aeroplane the next morning to keep us going. We saw blankets of wildflowers in paddocks as we passed through from Kalbarri to Geraldton and now more on our way to Jurien Bay, Miss6 thinks they’re all beautiful and I have to agree.