The drive from Cobar to Cunnamulla was less about 80’s music and more about Emu spotting! I think I lost count after about the 20th mob of Emus – most with young though we never saw the black and white coloured babies.

Just before hitting Cunnamulla we turned off to head to Charlotte Plains Station after I’d seen a friend camp here only a few weeks earlier. I was looking forward to a 2 night stop & revive. At the first gate we had the option of 15km of bitumen then 15km dirt or 20km of gravel to get to the homestead so we took the gravel. The road was in good shape though you could tell they’d had rain recently and our new car and clean camper were quickly caked with rich red mud.

We arrived at the homestead and were greeted by the two youngest residents – a gorgeous 4yr old girl who hit it off immediately with Miss7 and her 2yr old brother. I paid up for two nights with power at the shearing sheds and a tour the next day for mum and I to take with the owner (grandma to the kids).

At the shearing sheds campground we set up with four other campers and joined them by the fire with a glass of red wine. It took some effort to get that glass of wine – mum had brought it for me and it had a cork top so it took us all some time and cursing to get the bloody thing open with the old fashioned bottle opener in the camp kitchen. Needless to say I ended up drinking two glasses that night after the effort of opening the bottle.

It was a cold night in the camper down to about 2degrees overnight and I was awoken at 6am with a slight drop on my face. In my sleepy dilusion I put my hand up to feel the tent and ended up with a deluge of icy drops on my face to wake me up! I mopped it up with a towel and laid back in bed for a bit to keep warm and let the sun come up properly before getting up for the day.

We met Robyn (who had brought her Miss4 with her to play with Miss7) and another couple at the woodshed to hear about some of the history of Charlotte Plains Station that had been in her family for 94 years. Master15 was hoping to skip the tour and get dirty doing some real farm work but the truck they were expecting hadn’t turned up so he joined the tour. After seeing and hearing about the shearing shed,  Jack’s hut (& later Willy’s hut), the station cemetery and the homestead – we’d heard Robyn speak for hours about her family’s history – Miss7 had run off for lunch with her new found friend and we went back to camp for our lunch.

After lunch we grabbed our bathers and towel and headed to the bore and hot tubs, I think Miss7 may have been more excited at the site of the ‘cacoons’ (aka kayaks) by the hot bore drain. We spent a few hours soaking in some old tubs hooked up to the bore, floating in the bore drain and kayaking. As the sun began setting, the colours over the bore got richer and more vibrant – the blue of the sky was in stark contrast to the reds of the earth, and the greens from the recent rains were being enjoyed by some local Roos having a nibble and paying no attention to us.

We navigated the slippery and wet dirt roads back to camp, via the abandoned Jack’s hut and Willy’s camel paraphernalia and after a failed attempt to find a recently dead big black boar out on an old track. A hot shower to wash off the ‘mousse’ (aka moss) from our bathers and I was ready for a yummy hot dinner in the camp kitchen. It turns out that while the sulphur of the springs is great for weary bones and softening the skin, it’s not so good for Pandora bracelets. My once silver bracelet is now a golden bronze.

A quick game of cards with the kids before bed and pack up in the morning. This is definitely somewhere you could pull up camp for a week. Maybe next time we’ll stay down by the bore at the unpowered bush sites – who needs a hot shower when you can soak in a hot bore tub every day? 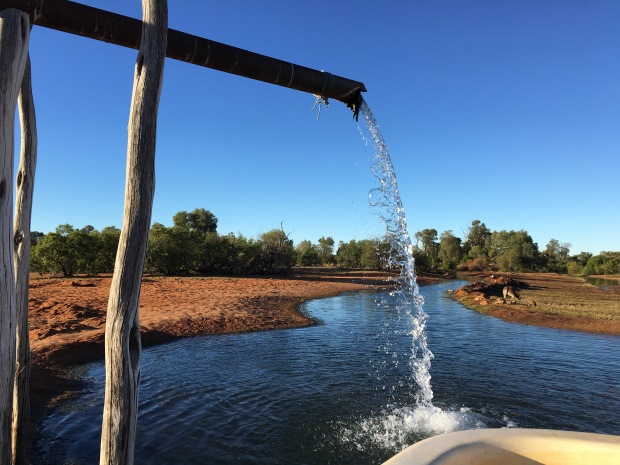