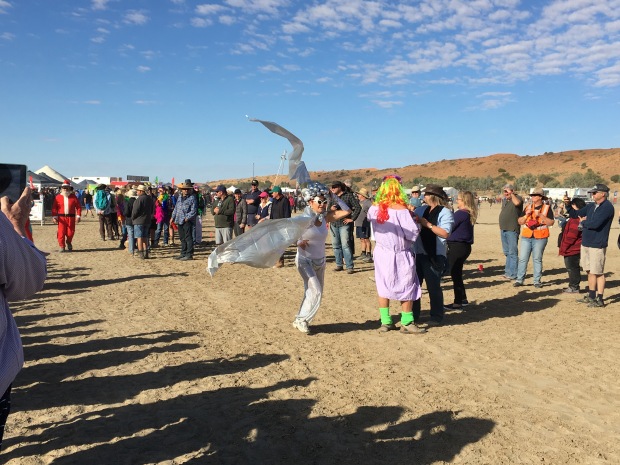 After falling asleep to the sounds of ‘Party rock anthem’ and ‘Footloose’, I was awoken by the sounds of the first morning helicopter ride over the Simpson Desert for day 2 of BRB2017.

The evening had been quite mild and today promised to be pretty warm with plenty of dappled cloud cover in the otherwise clear blue sky.

The festival was kick started today by the Big Red Bash Drag race – even in the middle of the desert there’s a fair contingent of blokes keen to dress up in women’s clothing – Priscilla Queen of the Desert style. Miss7 and her new friend Brissy11 thought it quite the spectacle – I was impressed at some of the costumes and that they’d not only made it to the top of Big Red to start the race but ran at a fair pace to raise funds for the Royal Flying Doctors Service.

I’d prepped some afternoon snacks and dinner ready for later and packed up our chairs to take down to the concert area. Although we got there not long after gates opened, the crowd was already thick with camp chairs and akubra adorned music lovers.

KFC decided to ‘bring the bird to Birdsville’ with a huge dining area, truck, slide and art activities. While we weren’t interested in their food – the kids and I did have a go on their Big Red slide before waiting for ages so that Miss7 could get her face painted. The young girl doing face painting had made the rookie mistake of starting the queue with full face paint and so had to offer the same to every kid that lined up afterwards – and she was doing it all with only a tiny brush – no sponge in sight!

When we got back to our seats, Nanna was happily rocking along to Russell Morris so Miss7 and I headed up Big Red with the boogie board and some solid shoes and socks. I happily sat on top of Big Red to take in the view while Miss7 practised her sand dune surfing now to the sounds of Kate Cebrano.

We waited on Big Red until sunset to take in the view and snap a few pics. The cloud cover had remained and the clouds formed many small patches all seemingly making a run for the sun and creating lovely patterns in the sky. The colours of Big Red changed as the sun got closer to touching the dunes. From deep red to blue tones when you got close.

After grabbing some quick pre prepared dinner and a sneaky couple of beers, we were back to the concert for the final set with James Reyne and Mark Seymour. It was lovely watching Nanna having a good time and even lovelier to see Master15 so happy that she was having such fun.

The clouds seemed to have chased the sunset all the way past the horizon and though the moon was bright, it wasn’t enough to keep it warm.

After a great day of music it was off to bed to the sound of Dolly Parton ‘9 to 5’ followed by ‘knocking on heaven’s door’. Our camp neighbours certainly have eclectic tastes in music.